i’m freaking out about having to leave my home/studio/community of the past 12 years ‘cos the landlords raised the rent 70% And I don’t know where to go. I’ve helped 3 friends move out of of similar artist spaces in just the past few weeks plus seen passing clouds added to the seemingly never-ending closing venues. I’ve been involved in many campaigns to stop the tide and been making a live dance film tracking and responding to the changes in a positive way but i feel depleted and despairing that any vibrant diverse urban culture will be allowed to thrive anywhere and helpless and powerless to change anything. Is there hope out there? Anywhere? All and any suggestions grarefully received..

This is what I wrote last night but hesitated to post to facebook. I want also to celebrate what I (and many others) have had and done in:

FOR 12 YEARS MY PRIMARY RELATIONSHIP HAS BEEN WITH A BUILDING! NO WONDER I’M FREAKING OUT!

In the beginning there was Red Shoe Films , upstairs at Unit 73a Regent studios. We did our own version of First Thursdays, one of which produced a promo video for the Deptford Beach Babes. I also developed my own performances like: the 7000 year old woman and a Sailor went to Sea and shot stuff for friends like Rachel Sweeney and Marnie Orr. These were years when I’d lost my love of film and was developing a love of dance, improvisation and performance, moving between so many forms I often felt lost, where before I’d always been more sure and focussed, I was unhappy, angry, drunk, lonely, but dancing and socialising a lot so happily found my way slowly through and out of a depression that had been a long time coming, and many new and more wonderful relationships.

So many people rehearsed, experimented, played, recorded, practiced, yogaed, showed, watched, shared and ate, drank and danced, shouted, sang and screeched in that space. In around 2011 I moved downstairs to a bigger unit and began a masters degree in Performance and creative research at Roehampton university. Where I started working on a promenade version of what has become the behemoth I am not a Village project.

In the new Unit 61, we began with a Space Launch:

and over the years I did a variety of events with a variety of people such as the Voyage of the Dead, which made good use of the talents of the studio incumbants of that time . I also started (with Ella Guru and Maryam Hashemi and later with Adam Vass) the Drawing and Dancing society (which is still running 5 years later though more sporadically since Ella moved to Hastings) and a weekly improvisation practice group called Wet Granny which led to some collaborations such as Ironic title and relationships with people I still perform with when the need or occasion arises. Some of us also performed with Ryan Jordan in a collaboration with noise=noise on 11.11.11.

and Antonio de la Fe also work-in-prog’d Make meCool here. We did a gorgeous show here with people who’d met at Mary Pearson’s Group residency Converge at Ponderosa (both live and via Skype)

The brilliant Ethan Folk came here and performed and edited and came up with amazing ideas every 2nd minute, having his first thoughts for his version of The Rites of Spring, Vernae, here.

Throughout this time I had been developing the promenade I did for my dissertation show for Roehampton (at Battersea Arts Centre) into a feature length narrative dance film, I am not a Village and everything basically  got subsumed into that. I began more and more to produce events (often related to IAMNAV) in spaces and places other than Regent studios, though still using the Unit 61 for rehearsals, workshops, sharings, meals, parties, celebrations. We were commissioned by Chisenhale Dance space to make Learning to Play in Victoria Park, Saffron’s Miserarium by Yellow Fish Epic Seattle durational performance festival, a promenade in the Hackney Wicked Festival, and Madigan Shive came to visit again and we shot a scene with her as an Angel of Time and History

Sara Valentine (who, like Madigan, I knew from Riot Girl times) came to visit with the Hungry March band (9 of them stayed here with mattresses all over the floor and a big green bus in the carpark.. neighbours got v excited! ) and we also shot a scene with them. 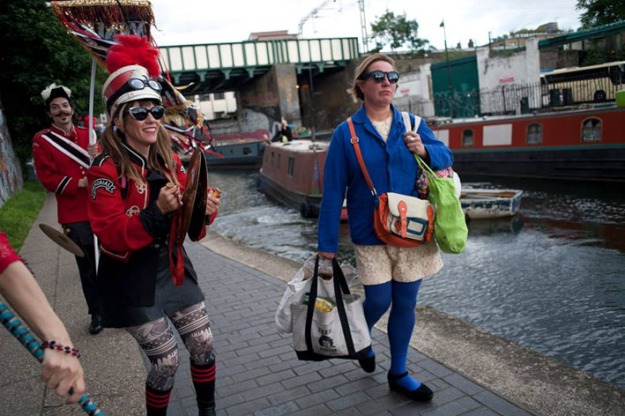 Not long after this time of veritable creative and social frenzy we had a big landlord crackdown on our activities and also a change of personnel in the space. My boyfriend moved in as did another couple, Pepa and Eliot, Noemie and her sometimes co-habitee Tanc as well as (handily with so many couples?!?) a psychotherapist, Mark. It became somehow a much more cohesive household rather than a lot of variously communicating individuals living alongside my creative maelstrom. The vibe also changed as Pepa started teaching Yoga and Dance here and Mark teaching Body Mind Centring. Also even though every one of them first came here during one or other of the aforementioned crazy creative events and parties, they weren’t so happy to live this lifestyle on a daily basis and bit by bit eroded my confidence and freedom to experiment here. There were still rehearsals, workshops, discussion gatherings, parties and dinners, but there was somehow no longer the same creative impulses, more restrictions. There were exceptions like when Nanouche Oriano premiered one of her puppet shows at one of our legendary Christmas Day feasts 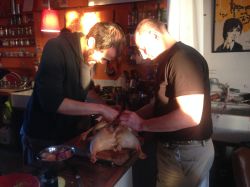 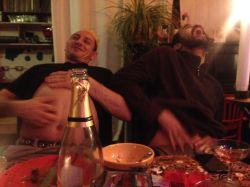 as well as inaugurating another regular set of events, the Creative Conversation dinners. and we did use it for the base for rehearsing the IAMNAV trailer

and for shooting the Broadway market scene.

We also did weekly Augusto Boal style training with the future and creative conversation dinners about everything from Love, to Protection, to Work, to Brexit to Black Lives Matter

But generally it became a lot calmer and more domestic here (actually also in many ways more fractious as suddenly housecleaning and other domestic issues became more emotionally problematic to certain housemates). I missed and still miss the time of creative experimentation and convivial chaos, but definitely this calmer time has also taught me much which is valuable: how to live with a really loving and functional partner, how to keep my temper under the duress of sharing with someone as melodramatic as me,  How to live with people who are much quieter and meeker than me. I’ve learned so much from Mark’s Process Psychotherapy and Body Mind Centring practices, so much from Eliot’s philosophising. I have probably become much more at peace with myself in this time. This has translated into my working practices, my working partnerships with Rebecca and Erifili, Michael, Jeremy and Caroline, Seke, Vanio and many of the other performers have also been incredibly nurturing and educative ( and fun) experiences. I have also learned to control my stage fright which was always a blight on my practices previously (with the help of Rebecca, Erifili, Seke and Mark in particular).

Before I started writing this I was in a bit of a gloom. What have I to show for nearly 12 years of living in one place, what have I got to now share with god know who god knows where? I know I’ve missed out countless moments, events, important people but writing down at least some of what has gone on here has reminded me of a richness and also a development that has occurred that I really hope in many ways can be transposed to those pastures new I am being forced to plough. Maybe I’d been getting gloomy ‘cos I’d stopped writing this blog for so very long.. better get back in the habit again.

Dance class now, well deserved after a day of morning exercises, completing an application to FLAMIN new approaches and blogging which I think is a good foundation for planning these last 56 days. Seyi and Ramon coming over tomorrow to plan playing 2 music gigs here. They are amazing musicians so this will be great. JV coming over at same time too so maybe we’ll plan something., he’s dj’d a lot here and helped organise some of the creative conversation dinners Kaffe Matthews coming over Thursday as she built the soundproofed area as her studio many years ago so i’ve suggested a creative destruction of it and we’re going to plot this. Just received a reply to the rather intense email I had to write to the more difficult flatmate.. do I read it before or after Irineu’s dance class? Whatever happens I’ve got to stop having my inspiration infiltrated by her controlling anxieties. I should also invite the Stop the Blocks people over, perhaps before the Passing Clouds March and I need to organise the:

Hackney Carnival Shoot: Maryam, Rebecca, Michael P, Cameraperson!!! and Michael N, Vanio? Anita? do we need performers or just need them for the:

I should invite Richard Dedomenici to do something here! We’ve talked about it so should do it

Thibaut going to come with Inga and Phil Von (YEH!): Hopefully we can do another Drawing and Dancing society while they’re here (have emailed Ella and Adam

AND Need to write Facebook post tagging everyone who ever stayed, performed or was entertained here to ask them what we do for the end and also to ask advices about what and where I go next.

I really hope we end with Keith comin over to do Zombies and Seyi and all the other African drummers, maybe in cahoots with Kaffe destroying the Breeze Block walls! This end-time can be a perfect medley of all the calm, crazy, creative, loving, feasting, sharing, communal, angry, passionate, happy, sad, living collectively, creatively, communally, separately, times we’ve had in these walls in these marvellous years.

Just thought: should we pull an effigy of the architect who allegedly jumped off the roof back onto the roof as a grand finally.. maybe hang him over the side where Probat once reigned on a big bouncy thread as a final farewell gesture?