Works of Art, Artists, Activists, Humans in general which continue to inspire me

“Gentrification is when a neighborhood is considered to be getting better because it becomes dangerous for those who live there.  The point of view shifts from the inhabitors to the invaders. It is a colonial paradigm.” (from Gentrification of the mind)

Bitch! Dyke! Faghag! Whore! and Bad Reputation and this is

Old Queen, excerpts from a work-in-progress performance by Penny Arcade

“Singing together is very intimate and I always say that music or the images or anything are just a kind of armature for revealing the radiance of these performers.. these generous radiant performers..  for that to come across and I think that performing is.. you’re so in tune with each other y’know.. it’s such an amazing template of the possibilities of human behaviour, of generosity, of being there for the other person and being so sensitive to the environment and of the other people” from Krista tippet interview with Meredith Monk

“many of the routes have come from very deep observation of man, what he is, what he is constructed of, what his intentions in life are, toward himself, toward his community, man, I feel that the roots of Dunham technique are in the effort to know man, in knowing man it means that there’s no one single culture that is essentially different from another”

https://www.youtube.com/watch?v=N4nCirfyHUk Katherine Dunham dancing her own choreography with her company (includes the screen debut of Eartha Kitt ) 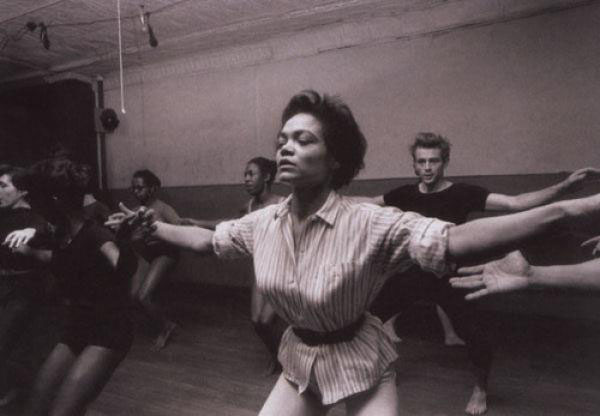 “when you give you must receive back”

“All the folks in our city, as in all places in the country and the world at large, have the capacity to experience their lives as a dance”

“I think Dance in it’s seminal beginnings, was meant to have a purpose and the purpose was a direct link and tie-in with the life of the individual, the life of the family, the life of the community. My concern is to renew and re-affirm these essential purposes of dance.. to give greater harmony and wholeness to our lives”

Repeating whenever necessary whenever an old or new issue re-surfaces

“ I don’t want Spectators. Spectators imply a spectacle that takes place to entertain and amuse and perhaps stimulate them. I want witnesses who realize that we are dancing for a purpose – to accomplish something in ourselves and in our world” (Spectators remain in their own minds and lives whereas witnesses are present)

I find it more interesting to trigger associations in the audience than psychologies. The way to do this is to set up oppositions rather than answers. For example, if one person nods “yes”, while another person is shaking the head “no”, you have set up an opposition. And in the space of this opposition there is room for the audience to dream. I am after diverse responses. I want individuality in the audience rather than conformity. And then you act (p.37)

I want to make theatre that would look ridiculous on film or television.. Look around you right now. Are you reading this book in a room? .. how would you stage this very moment for the theater and how would you present it to a television camera?.. (p.37)

The theatre is one of the few art forms that moves easily between poetry and prose. But it is imperative to choose which language you intend to use at each moment. The left hemisphere is usually linked to prose. The right hemishere is related to rhyme and poetry. Description is prose. Expression is poetry. Most pedestrian movement is prose while dance is poetry. Speaking is prose while singing is poetry. To switch modes you switch brain function. But you can choose (p.38)

And then you Act by Anne Bogart

Kembra Pfahler and The Voluptuous horror of Karen Black

(photos by Joao Florencio at Queen Elizabeth Hall, Antony’s Meltdown, August 2012) I was there too but my pictures were crap.. 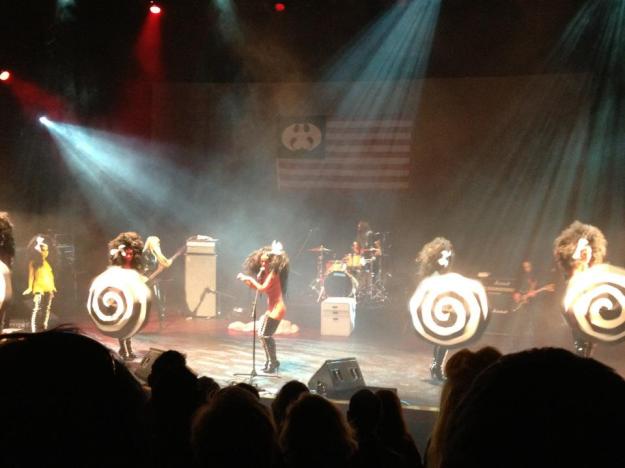 (From Ken Mai) Other Butoh founder Kazuo Ohno said: If you wish to dance a flower,you can mime it and it will be everyone`s flower and uninteresting: But if you place the beauty of that flower and the emotion which are evoked by it into your dead body,then the flower you create will be true and unique and the audience will be moved! Ohno believes that dance should reveal the form of the soul ,and to achieve this the dancer must separate himself from his physical and social identity. Butoh revolves around the idea of the dead body into which the dancer place an emotion which can then freely express itself. Without this technique the living the body would divert the emotion,drawing it into its own logic. Ohno tells us that as the puppeteer pulls the strings ,the soul should guide the artist. About the freedom of the dancer: this must be understood in the eastern sence: It does not mean free will,but rather shaking off the confines of free will,liberation from narrow thoughts and individuallity. Dancing freely means giving up the notion of oneself,reverting to the original memory of the body,and discovering the soul stifled within.

“Body is the place” Vito Acconcii

“In the hierarchy of art.. and art is hierarchical.. i think that music is at the top and performance is the 2nd.. It’s so important in performance to think about presence.. it’s the only thing we’ve got in our lives” Marina Abramovic (M.A. on Performance, Chicago Humanities Conference)

It will be almost a month since you wrote to me and you have possibly forgotten your state of mind (I doubt it though.) You seem the same as always and being you, hate every minute of it. Don’t! Learn to say “fuck you” to the world once in a while. You have every right to. Just stop thinking, worrying, looking over your shoulder wondering, doubting, fearing, hurting, hoping for some easy way out, struggling, gasping, confusing, itching, scratching, mumbling, bumbling, grumbling, humbling, stumbling, mumbling, rambling, gambling, tumbling, scrumbling, scrambling, hitching, hatching, glitching, moaning, groaning, looming, boning, horse-shitting, hair-splitting, nit-picking, piss-trickling, nose-sticking, ass-gouging, eyeball-poking, finger-pointing, alleyway-sneaking, long waiting, small stepping, evil-eyeing, back-scratching, searching, perching, grinding, grinding, grinding, away at yourself. Stop it and just DO!!!

Eva Hesse and Sol LeWitt nurtured, supported and inspired each other over their 10 year friendship, which is evident in their work and letters. In this particular letter from LeWitt to Hesse the emphasis is on letting go of anxieties by ‘doing’

(sent to me by a friend when i was strugglin..)